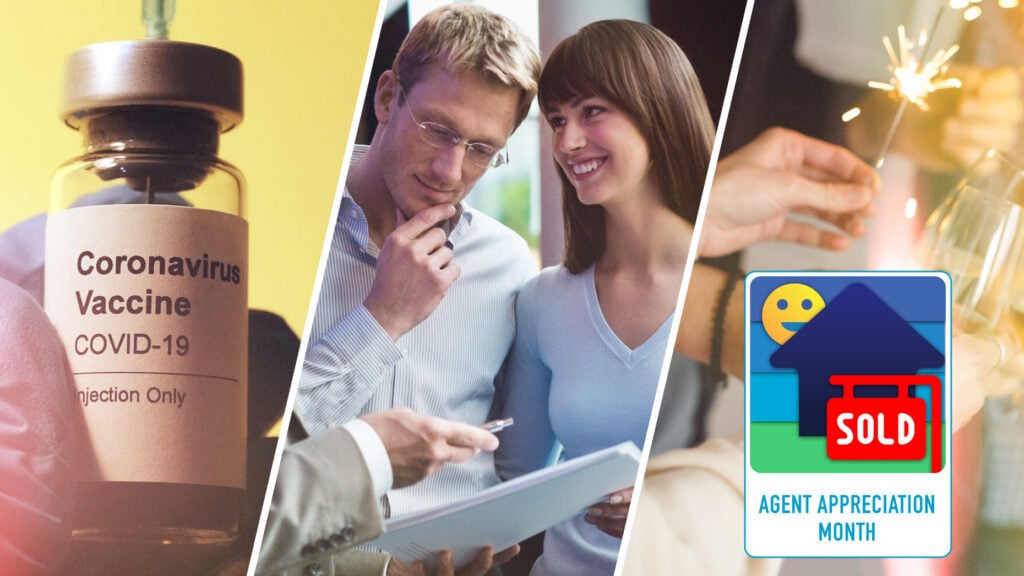 Real estate professionals are generally optimistic about the coming year, even as many are still bracing for and worried about a pandemic with no end insight.

That’s according to Inman’s latest agent appreciation survey, which ran all week and ultimately generated hundreds of responses from industry professionals. Probably the biggest single takeaway from the survey was that agents are upbeat about their prospects in 2022; when asked about their sentiments, a majority, or 52 percent, indicated they are “cautiously optimistic.”

Another 31 percent said they were “very optimistic” about the coming year. 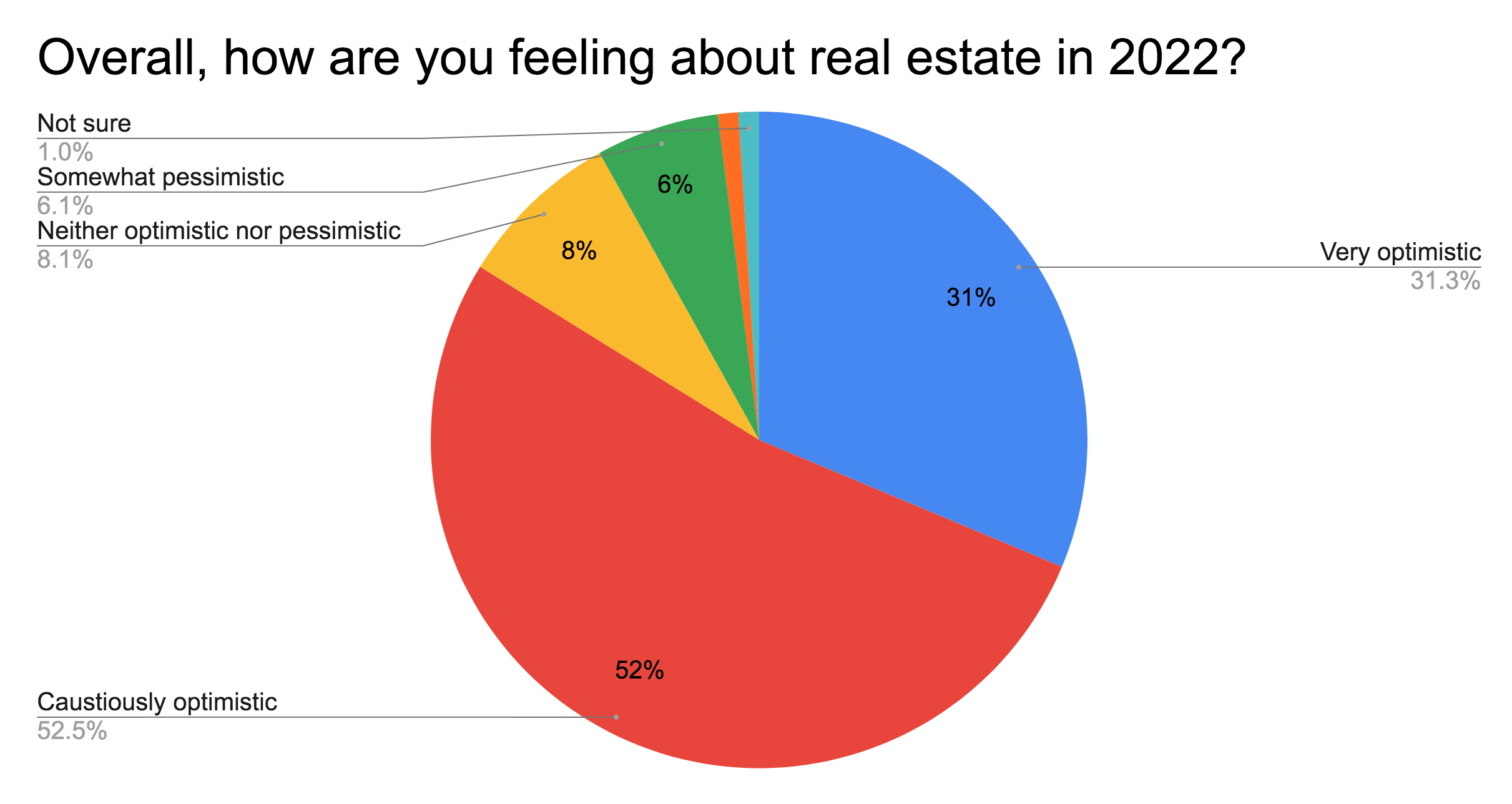 By contrast, only 7 percent of respondents indicated they were either “somewhat pessimistic” or “very pessimistic.”

The relative optimism of the survey respondents is probably due to a couple of big factors. First, a vast majority of respondents, or 64 percent, indicated that they expect a seller’s market to weaken somewhat over the coming year, but ultimately continue. Another 27 percent said they foresee a “strong seller’s market” continuing. All told, this means more than 90 percent of respondents envision strong demand continuing over the coming 12 months.

It’s worth noting, however, that a full fifth of respondents, or 20 percent, also indicated that 2021 was slower than normal.

This survey wasn’t scientific and it elicited responses from a self-selecting group of Inman readers, but it’s still notable that there is a contingent of industry members who are apparently struggling to thrive during the chaos of the coronavirus pandemic. These findings support anecdotal commentary that often gets shared at industry gatherings such as Inman Connect indicating experienced agents are possibly pulling ahead even as less experienced agents face some headwinds while getting their foothold in the business. 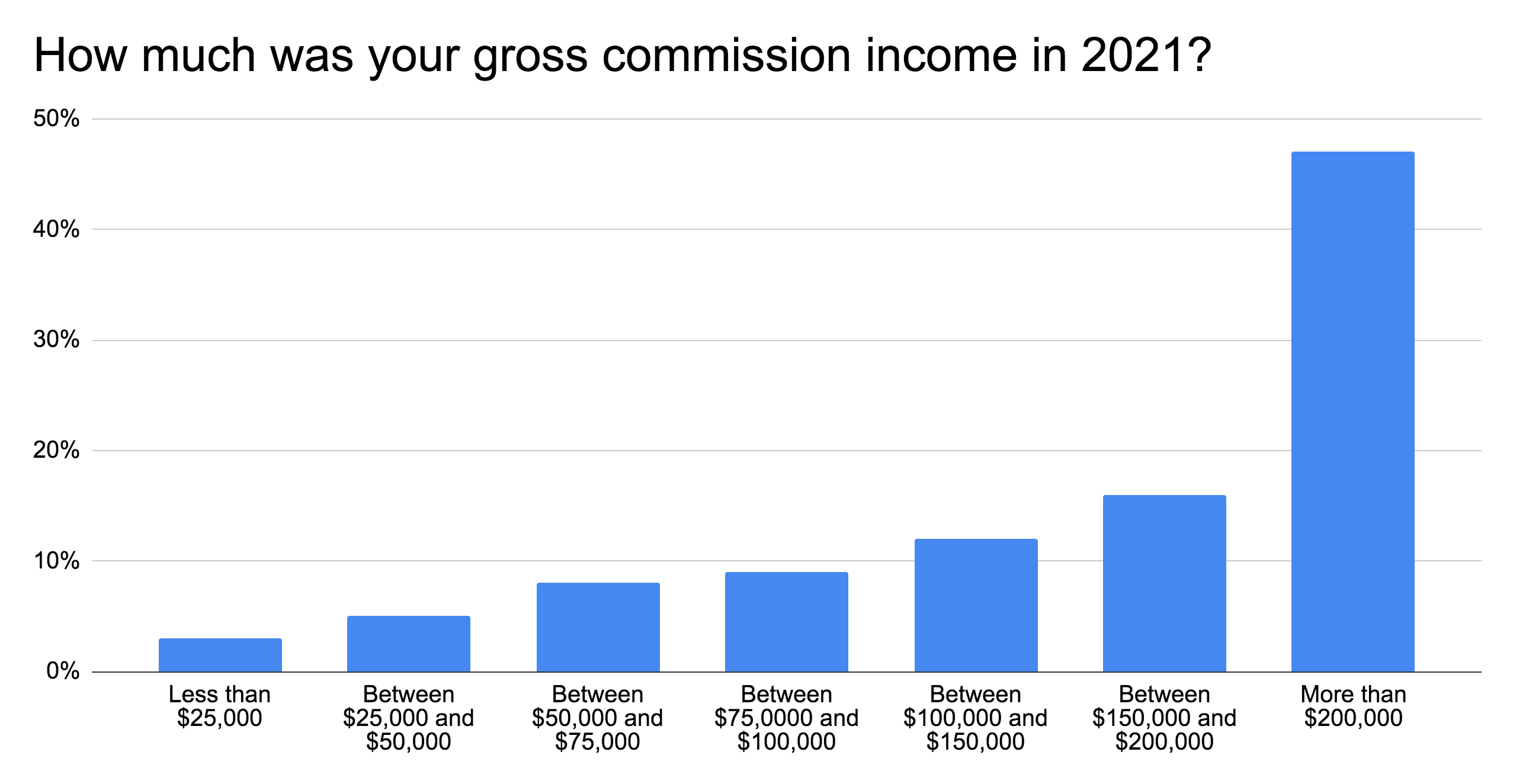 Significantly, when Inman asked a similar question in a survey last year, only 35 percent of respondents indicated they made more than $200,000 in 2020, hinting that more agents may have made more money in 2021.

Beyond income and general optimism, the survey also included a number of other positive findings for the housing business. Asked about consumers, for example, 43 percent of respondents indicated that their clients are also “cautiously optimistic” about the coming year in real estate.

A plurality of agents, or 40 percent, also indicated they work between 40 and 50 hours per week. Only 22 percent of agents said they work more than 50 hours each week.

All of these findings portend a strong 2022 for real estate.

However, that doesn’t mean there aren’t signs of stress as well. Most significantly, a majority of respondents, or 55 percent, indicated they remain “somewhat worried” about the pandemic. That far outpaced the second most popular response to the question, which was “I’m not worried at all.”

Along those same lines, a large majority, or 60 percent of respondents, indicated they believe the “pandemic will improve but not end in 2022.” More than a quarter, or 28 percent, also indicated they envision the pandemic continuing more or less as is for the next year.

Just 9 percent of respondents said the pandemic would end in 2022.

On the other hand, only 4 percent said they see the pandemic actually worsening over the course of the year. 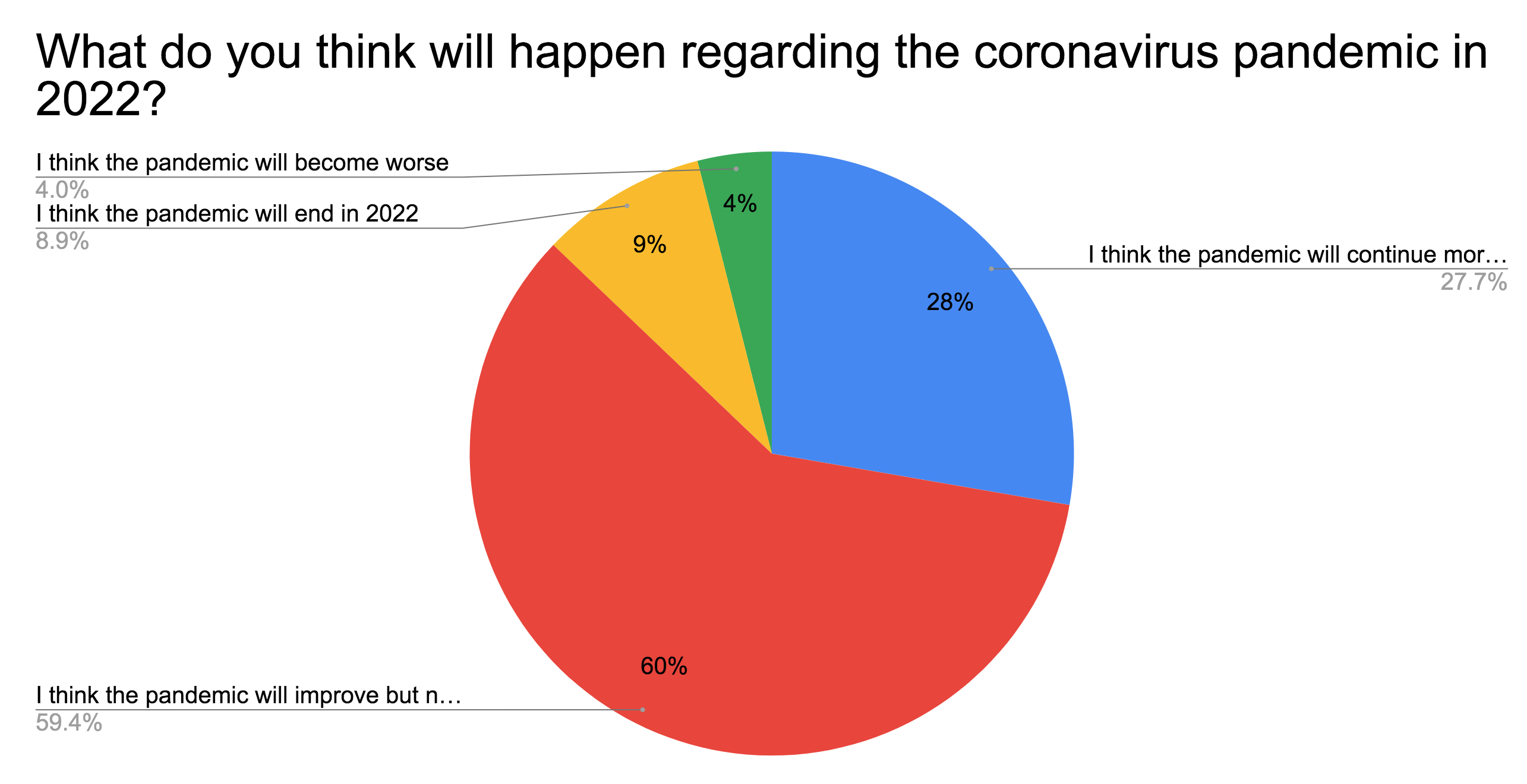 These findings, coupled with general optimism about the market, suggest the real estate industry has made peace with COVID-19 and figured out how to continue working amid the crisis. That might sound obvious at this point, but it’s worth recalling that it very much wasn’t a given outcome way back in March 2020 when the coronavirus first swept North America.

Beyond the pandemic, the other biggest point of stress in 2022 that agents pointed to in the survey was inventory shortages, with 71 percent identifying that issue as 2022’s biggest challenge. Rising interest rates were the second most popular choice when asked about 2022 challenges, though that answer only garnered 7 percent of responses — suggesting most members of the industry are not terribly worried about rising rates.

Despite inventory shortages and a pandemic, however, the survey ultimately found that Inman readers, at least, are generally satisfied with their careers. Asked about overall difficulty levels, for instance, 55 percent said their jobs are more or less staying the same, rather than getting harder or easier. That’s a significant finding given the amount of disruption that has taken place in real estate lately.

A plurality of respondents, or 44 percent, also rated their happiness with their careers a 5, the highest choice possible. Another 37 percent selected 4, the second highest option. 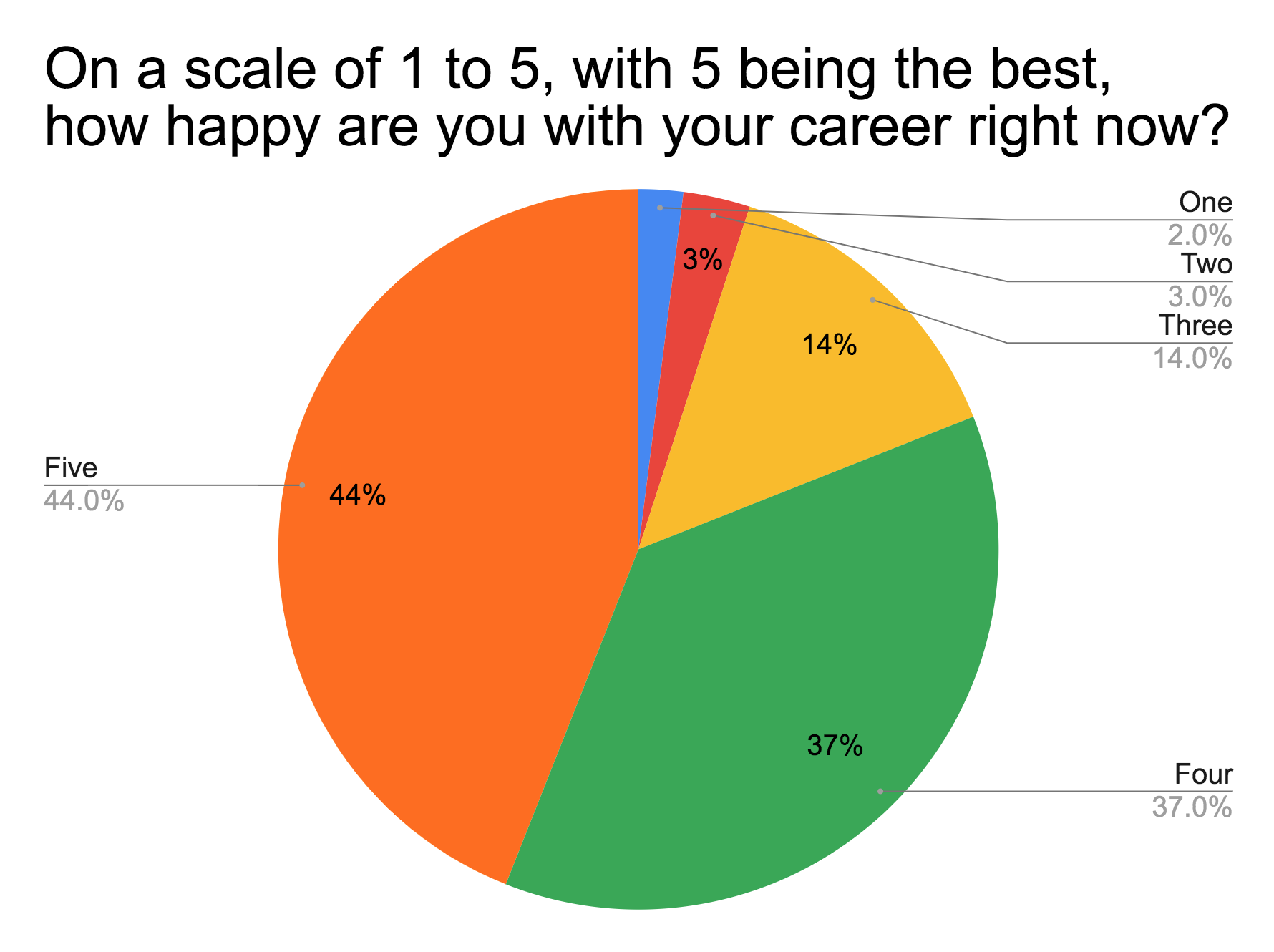 The survey’s final question also asked respondents how happy they are overall, not just in their careers. To that question nearly half of respondents, or 46 percent, said they were “very happy.” Another 36 percent indicated they are more or less happy. “Neutral,” “slightly unhappy” and “very unhappy” each got less than 10 percent of the responses to the survey.

The conclusion, then, is that while a life in real estate may involve tackling challenges such as low inventory and an ever-shifting pandemic landscape, it can ultimately lead to a happy life. 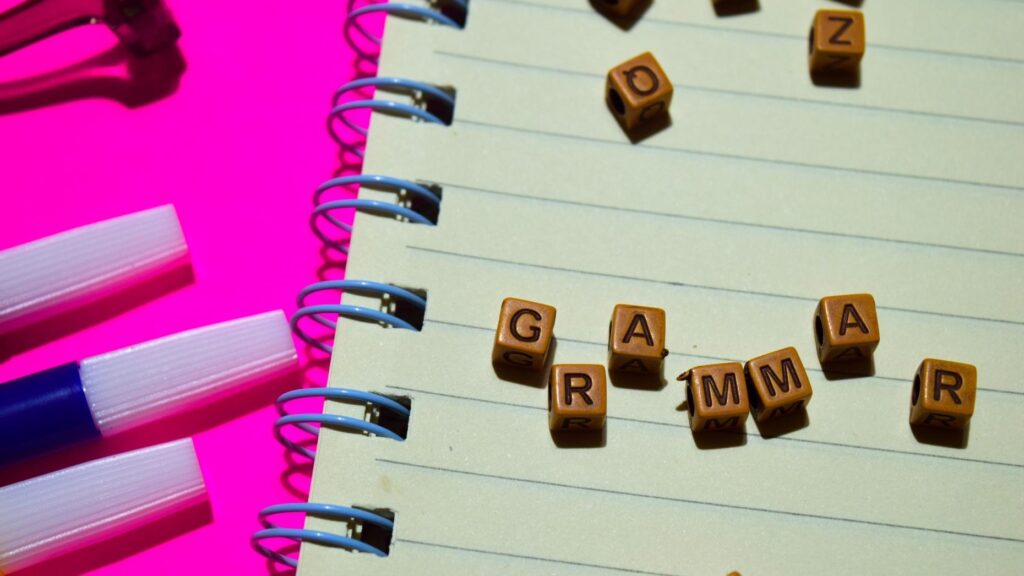 News Quiz: Test Your Knowledge Of The Biggest Stories For Week Of Jan. 2 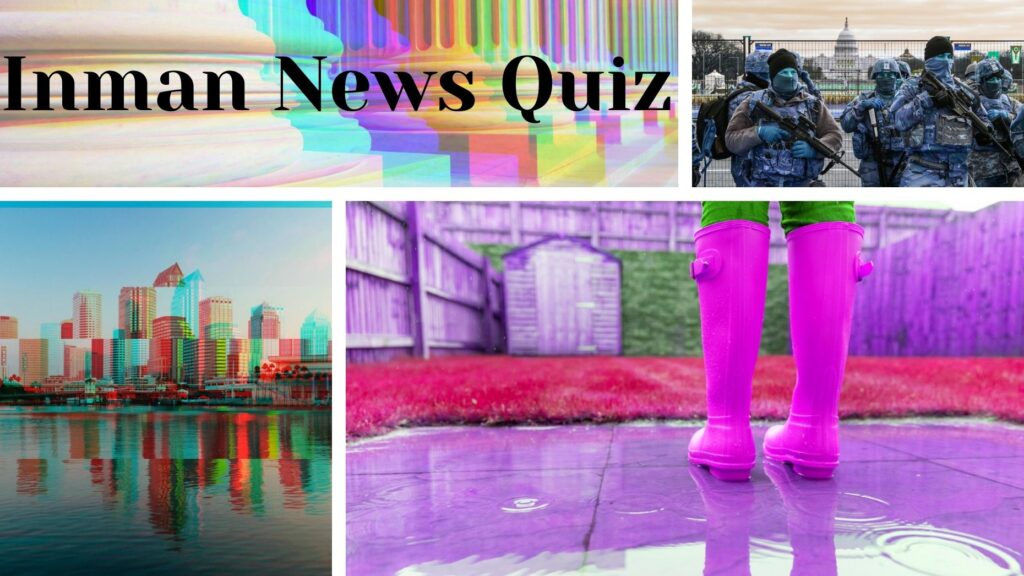