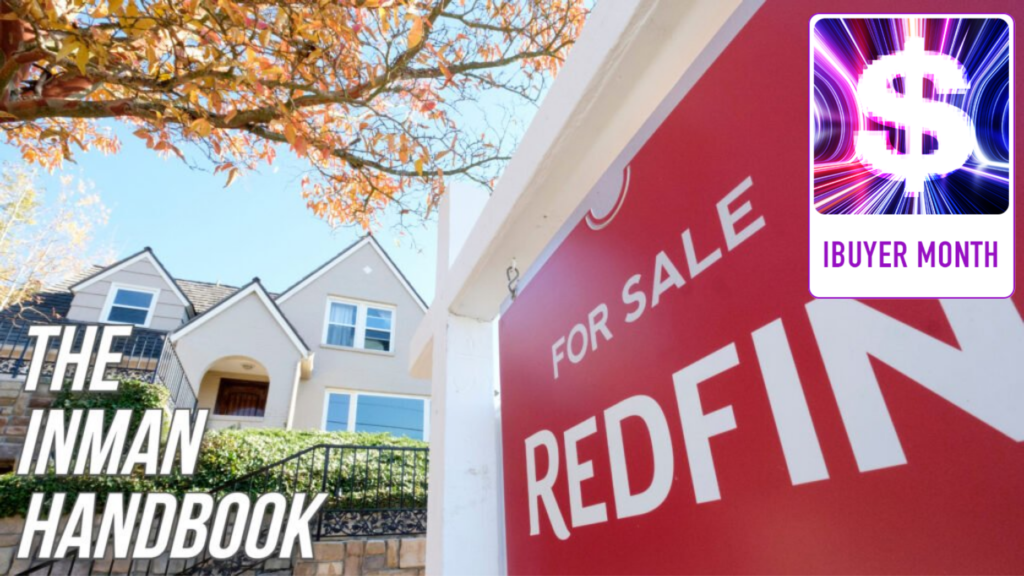 This is the third in a four-part series on how agents can get started if they choose to partner with an iBuyer. Check back throughout February as Inman digs into iBuyers to determine what the new year has in store, where opportunities lie for real estate agents and what brokerages should expect. It’s iBuyer Month at Inman.

As a real estate brokerage in its own right with offerings in the title, home loan and rental businesses, one could be forgiven for overlooking Redfin’s foray into iBuying.

It’s far from the only company to provide instant cash offers for sellers, and competitors — including Opendoor and Offerpad — have more of a one-track focus on their respective iBuying businesses.

The RedfinNow iBuying program may still be one of the smallest of the big players in this space, but it’s also been expanding quickly as it and other iBuyer competitors rushed to fill the gap in the wake of Zillow’s own iBuyer collapse last year.

Revenues from Redfin’s properties business quadrupled in 2021 to more than $880 million — and even turned profitable, according to Redfin’s year-end financial filings.

RedfinNow more than tripled the number of homes it sold the previous year and posted a 28 percent increase in revenue per home, the filings show.

With Redfin CEO Glenn Kelman recently highlighting the program as a bright spot in the company’s earnings, RedfinNow looks like it will remain firmly in the iBuying picture for the foreseeable future. 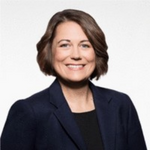 Heather Mahmood-Corley, a Phoenix-based Redfin agent, said that listing agents for other brokerages can treat an offer from Redfin as another tool to put their clients in a strong position.

An instant cash offer can also provide flexibility for clients who are looking to buy a home without a contingent offer, she told Inman.

“I see how people interact and some of these blogs and Facebook groups that I’m on that just are like, ‘No, I don’t want to deal with them,’” Mahmood-Corley said of iBuyer skepticism. “And I think they need to have an open mind. We — Redfin, and a lot of these other investors — are not going anywhere.”

But not all iBuyers are the same, and agents should be familiar with some of the unique aspects of doing business with RedfinNow.

Where to start with RedfinNow

Like other iBuyers, one of the big draws of RedfinNow is the ease with which one can obtain an all-cash offer for their home.

Agents and homeowners can request an offer on Redfin.com or through the Redfin mobile app. After reviewing details about the home, the RedfinNow staff typically takes about 24 hours to respond with the terms of a cash offer that can be presented to the client.

Once RedfinNow commits to buying a home, it makes repairs and then turns around and lists the property again on the open market — with a Redfin agent handling the transaction.

Not every home is eligible for a RedfinNow offer.

For one thing, the service is currently active in 30 markets nationwide. If a client’s home is not in one of those markets, they won’t be eligible for an offer from RedfinNow.

In the markets where RedfinNow does business, it mostly sticks to making offers on single-family houses and townhouses. In some cases, the service might purchase condos. It rarely, if ever, makes offers on multifamily properties, including duplexes, company spokesperson Erin Osgood told Inman.

Currently most home sales to RedfinNow are not performed with a listing agent, Osgood wrote in an email. Instead, they’re either coming to the service directly — and skipping the agent fees involved — or they’re referred to the service by a Redfin home sales adviser.

“Since many homeowners now request cash offers as the first step in their selling process, this is the most common situation for RedfinNow customers,” Osgood wrote.

But in part because of the unique structure of Redfin as a company — and differences in how their agents are compensated — the brokerage’s agents do end up referring some clients to sell to RedfinNow.

These cases are especially likely when a homeowner is looking to move, and wants to make a strong offer on a home that’s not contingent on the sale of their current residence, said Mahmood-Corley, the agent based in Phoenix.

Mahmood-Corley had one such client who was preparing to retire, sell his home and travel the country in an RV. After reviewing the options with him, she found he had a strong desire not to go through the hassle of a traditional sale.

“He really didn’t want to go to market,” she said. “He said, ‘I kind of don’t want to deal with the stress of showings or anything else.’”

Other clients Mahmood-Corley has worked with ended up selling to the iBuyer because of the time limitations of selling their house in the middle of another home purchase.

Like other iBuyers, RedfinNow provides a hard cash offer and a flexible timeline for closing. The seller has five days to consider the offer, and can ultimately pick a closing date within 10 to 90 days of accepting.

But while most sellers who work with RedfinNow are doing so without an agent, RedfinNow asset manager Cari Darcus wants to raise awareness about opportunities for agents — including those from other brokerages — to get involved.

“I think that is definitely something that we’d like to change,” said Darcus, who is based in Portland. “We want to get the word out there that RedfinNow is a great option for a lot of sellers. And it’s really a resource to help agents solve a seller problem, or really help their clients make their next move.”

But agents and their clients should be aware of several key ways this differs from a traditional transaction, and even from a sale to another iBuyer. 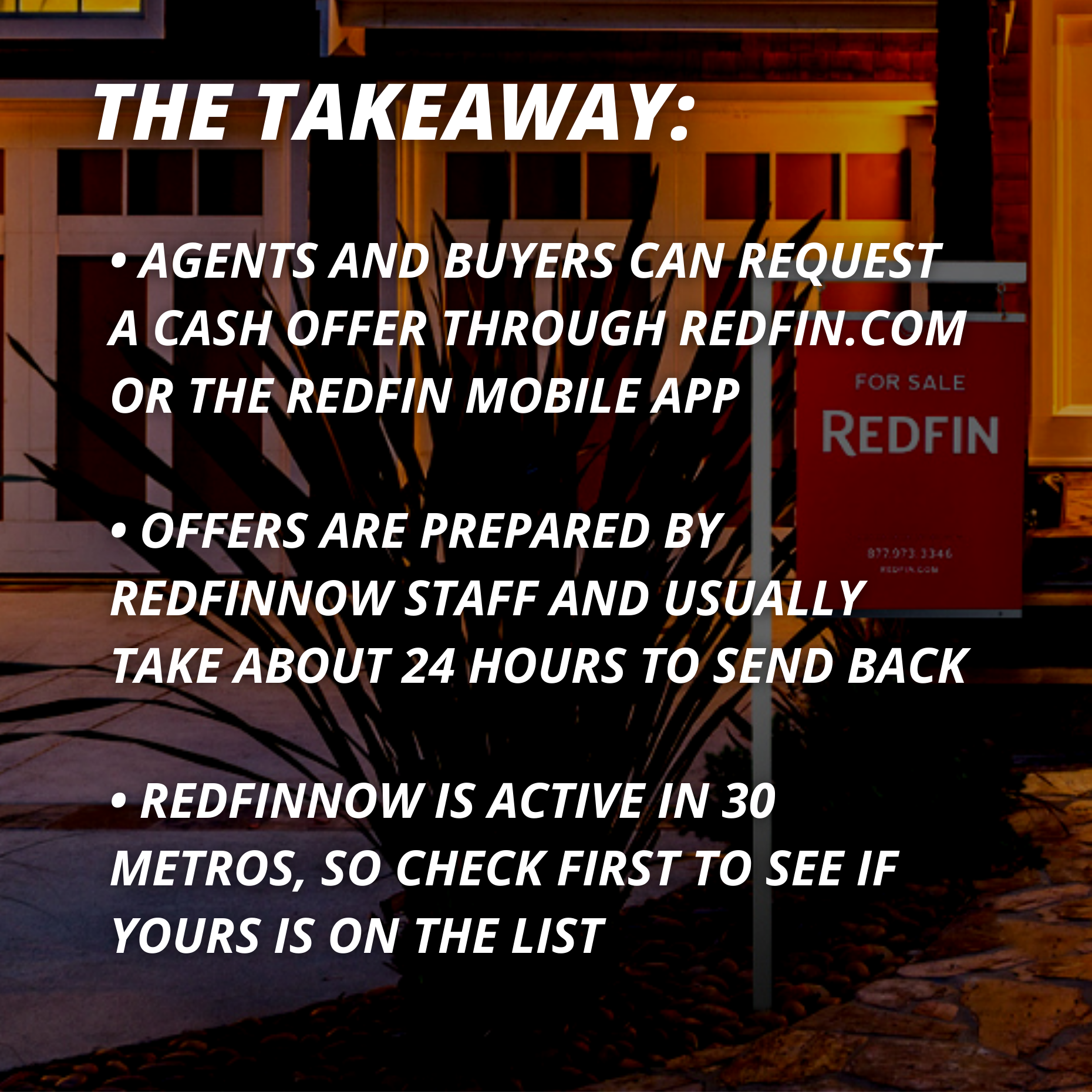 What agents and their clients need to know

Most likely, an agent who is compiling instant cash offers for their clients is doing so from multiple iBuyers.

Under a RedfinNow transaction, sellers with an agent are responsible for paying the agent’s listing fee. This is something that an agent should communicate clearly to the client before they make a decision on an offer.

The seller will also pay a series of fees for the sale, repairs and closing costs. These fees, which typically total between 6 percent and 14 percent of the sale, are deducted from the final sale price.

While policies differ and might affect agents, at the end of the day, consumers are unlikely to favor one iBuyer over another as they seek the strongest possible offer, iBuyer expert Mike DelPrete told Inman.

“Consumers just want to maximize the sale price of their home,” DelPrete said. “So whether it’s RedfinNow, Offerpad, Opendoor, your grandmother down the road, whatever, they just want to get the most money possible for their home. And it really moves everybody to get as many offers as they possibly can.”

This has been catching on more and more in recent years. The share of home sales involving an iBuyer remains small, but has doubled in recent years to roughly 1 percent in 2021, according to a January report from CoreLogic.

Despite the rapid growth of its iBuying business, RedfinNow remains the smallest operation of the three remaining major iBuyers.

Since 2017, RedfinNow has accounted for 2 percent of all iBuyer home purchases. That’s compared to 56 percent for Opendoor, 18 percent for Offerpad and 24 percent for the now-defunct Zillow Offers.

But as all the extant iBuyers look to expand and fill the vacuum left by Zillow’s exit, Darcus believes Redfin’s version could start to stand out even more to agents and clients.

“I think that RedfinNow’s business model is a little bit different, in that we just want to make a little money on a lot of homes,” Darcus said. “We pay market value for these homes, and our profit margins are actually very small. Ultimately, we just really want to do what’s best for the customer.” 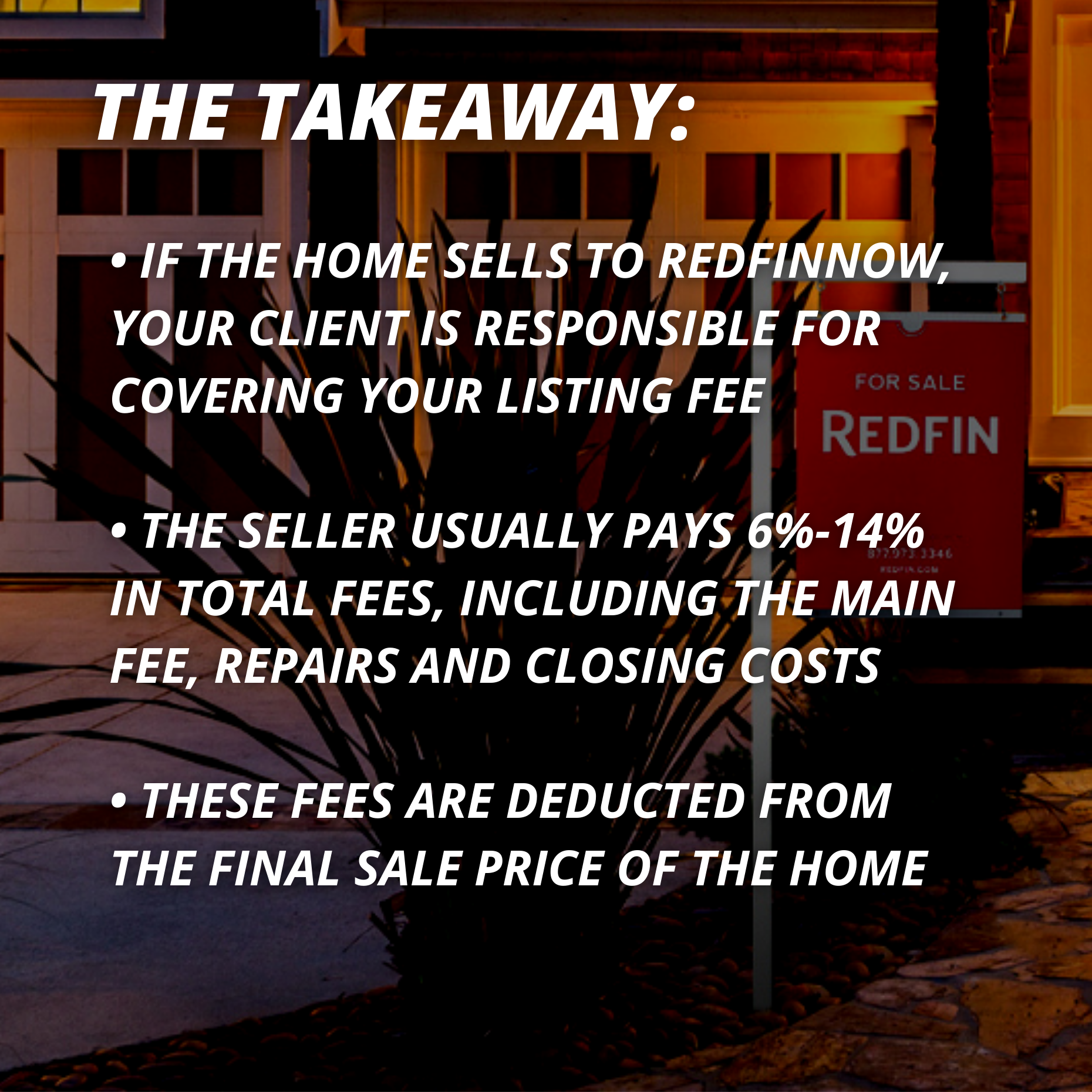 When comparing offers from various iBuyers, not every one comes with the same terms for clients — or their agents, whose commissions hinge on the terms of the sale.

Importantly, unlike their biggest iBuyer competitors, RedfinNow does not offer an incentive bonus for agents for referring their clients to the program.

This approach stems from the fact that the iBuyer program is just one of Redfin’s suite of real estate services, rather than its whole business, Darcus told Inman.

Despite the lack of incentives for agents like those offered by Opendoor and Offerpad, Mahmood-Corley said RedfinNow’s structure is geared towards something agents and clients alike can appreciate — a smooth closing process.

RedfinNow has a dedicated team of customer service agents who work solely on its iBuyer program, lending itself to quicker responses and decisions, Darcus said. Furthermore, Redfin’s title business connections ensure the title company will be local to the transaction, instead of out-of-state.

Mahmood-Corley, who has helped buyers purchase from other iBuyers, said it can be frustrating to deal with an out-of-state company.

“It’s like oil and water,” Mahmood-Corley said. “It’s a struggle. Every time you do one with out-of-state How Real Estate Agents Can Work With The iBuyer RedfinNow like that, there are probably issues almost with every deal I’ve ever done with them.”

At the end of the day, Mahmood-Corley said, it can’t hurt to have one more offer in hand for the client to consider.

“I think it’s a very good option [for] a traditional agent [or a] non-Redfin agent at other brokerages to have this — at least be well versed on how they work and what they do,” she said. 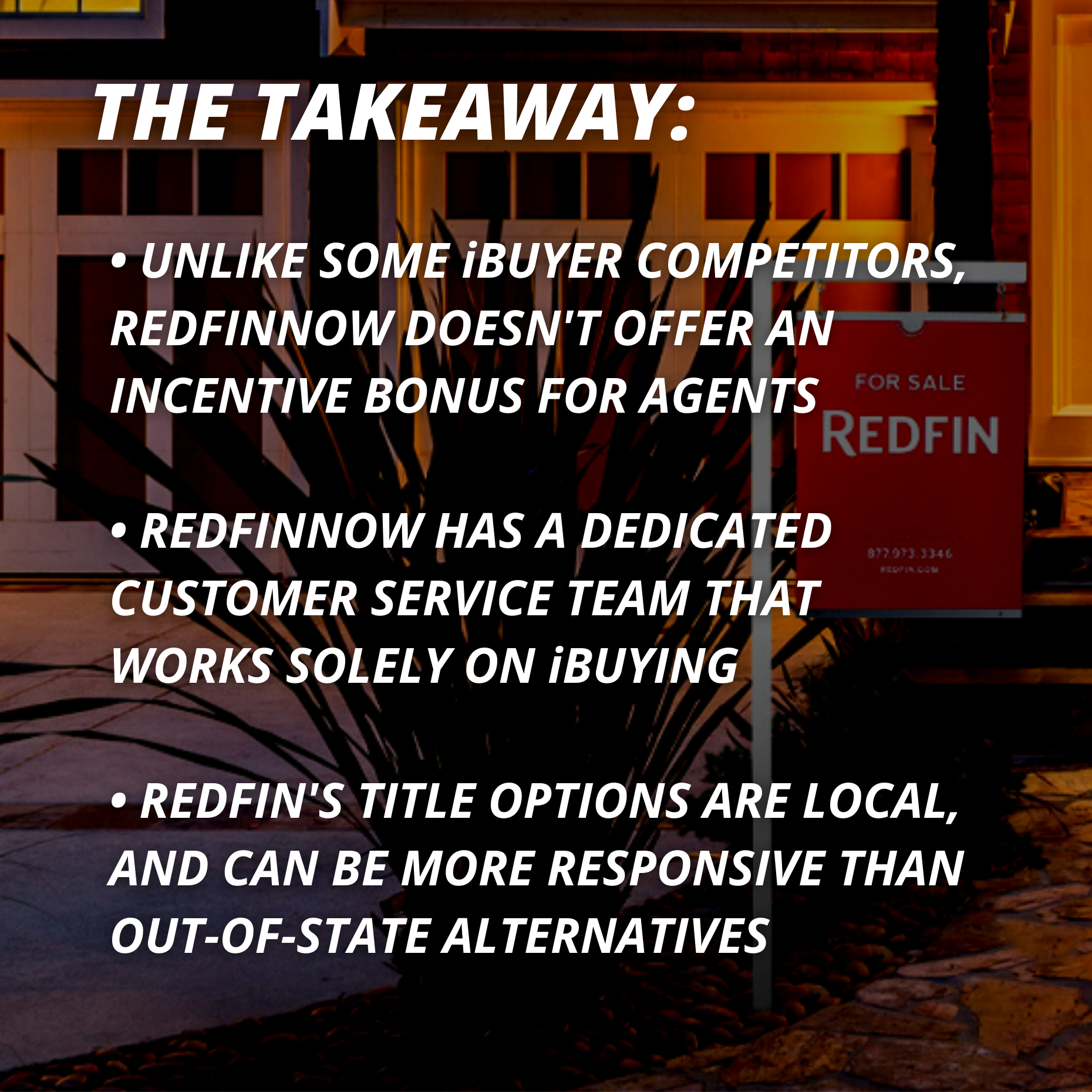 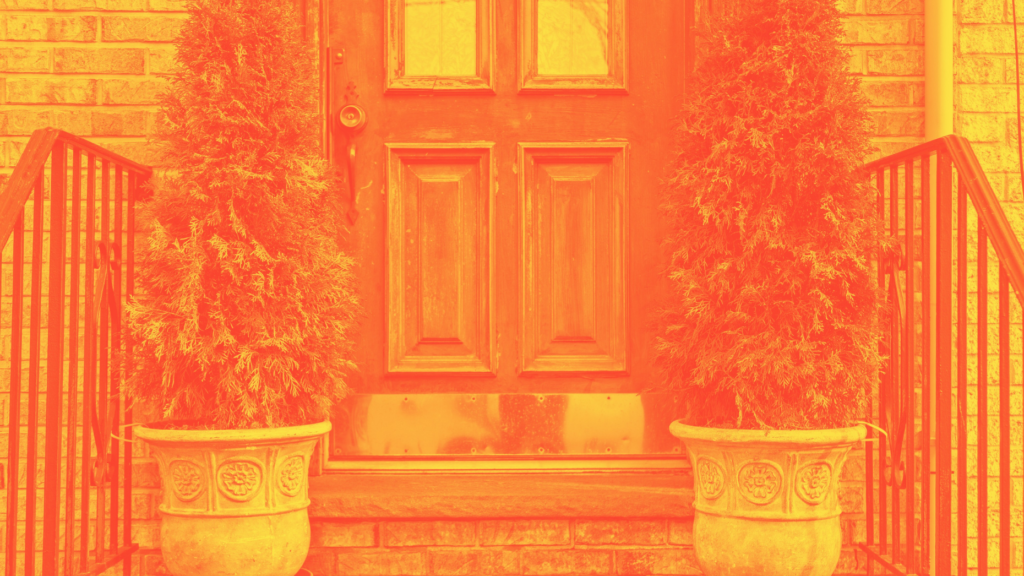 What The Latest Real Estate Numbers Mean For Your Business

How Agents Can Define And Create A Real Estate Personal Brand 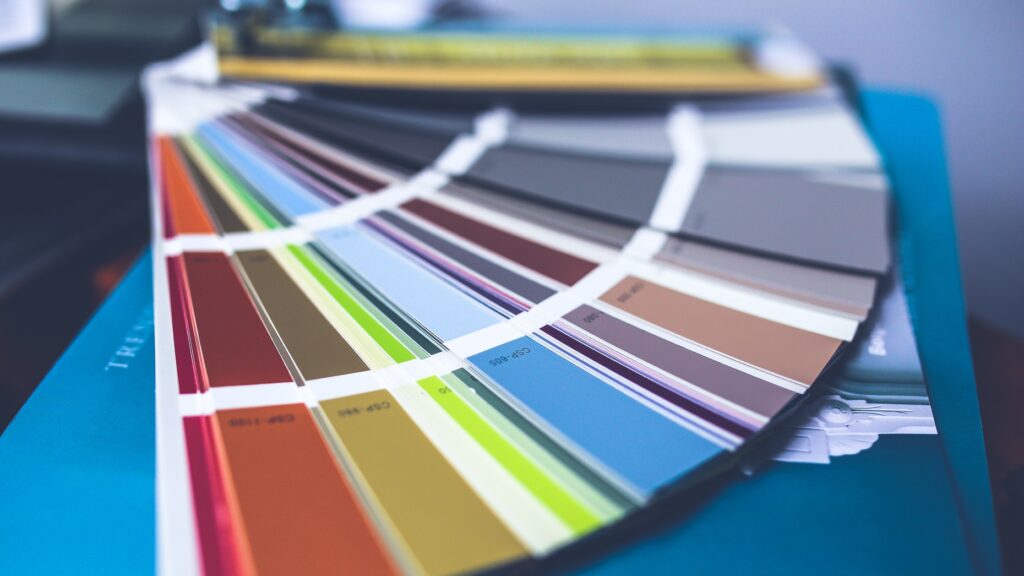